While conducting their business, companies exchange information necessary to carry out their projects. Quite often, such information is of a confidential character. In order to protect themselves against disclosure of such data by the other party, businesses sign non-disclosure agreements (NDA).

In case of digital agencies, this type of agreement is not unusual and a suggestion to sign the document made by the ordering party is perfectly justified at all stages of the cooperation. From the perspective of parties sharing strictly classified information, concluding an NDA is a necessity. It is best to do that at the start of the collaboration – even if there is still time before confidential data will be disclosed. Signing an NDA makes sense even if the project performance agreement contains provisions in regard to protection of confidential data.

What is an NDA

A non-disclosure agreement is a document in which two or more parties oblige to refrain from disclosing information received for a specific period of time.

The data which is subject of the confidentiality agreement may be specified within the document or described in another way, more on that subject is coming shortly.

Companies sign NDAs in order to prevent information leaking to the outside, especially to their competition. Signing this type of agreement does not imply a lack of trust, rather than that, it is an attempt to encourage the other party to make all efforts in regard to protection of confidential data. NDAs are concluded all over the world and reluctance to sign them may indicate malicious intent, a lack of understanding or a lack of knowledge of business practices. Each of those cases may raise suspicions in regard to commencing cooperation. While taking into account a certain possibility of offending the other party, especially in case of multicultural relations, we may suggest signing an agreement on the basis of which all parties would be obliged to maintain confidentiality.

What may an NDA refer to

A confidentiality agreement may cover all types of information that the representative of the disclosing party considers worth protecting under a confidentiality clause. The data protected under the agreement may be used solely in processes related to the performance of contractual works for or in partnership with the disclosing party, never to its detriment. An NDA may refer to information disclosed by one party (unilateral agreement) or information exchanged between two or more parties (mutual agreement).

The scope of the subject matter of this type of agreement can be very wide. Standard NDAs often relate to protection of any and all information. However, if any data is particularly sensitive, it is recommended to specify it in the document.

In case of digital agencies, information temporarily covered by the obligation of secrecy may relate to working on a new website. It is less often that an NDA features a clause on classification of commercial information relating to specific projects. Such a provision may, however, be contained in the agreement on the performance of the project.

It is common practice to include a provision in the NDA on the basis of which only documents and files marked as confidential are covered by the protection, while their transfer is recorded each time. It is a matter of complete discretion. Agreements are adjusted to the circumstances.

Obviously, confidentiality cannot apply to information which has already been disclosed in any way prior to signing the non-disclosure agreement, nor to information disclosed (which must be evidenced) during the term of the agreement – it makes no sense to protect something that is already publicly available.

Provision of a complete list of confidential data poses a risk of omitting certain information. On the other hand, a complete lack of specific description may also cause some issues. It is essential for both parties to bear in mind that they are not keeping information confidential just for the sake of it, but they are doing it in the best interest of their business partner and it serves a specific purpose. Therefore, the distribution of information at the receiving party’s end should be supervised by a person with appropriate competences, who will share only the information required by certain persons or subcontractors to perform their tasks. This person should also be responsible for ensuring protection of information by third parties with whom the information is shared. Such a person may be, for instance, the Project Manager.

What about third parties?

In regard to employees, there is no need to sign a separate agreement. It is sufficient to include an appropriate clause in the employment agreement concluded with the employee or to sign a general confidentiality agreement in relation to any and all information received during the course of their employment. It is also possible to sign an agreement with reference to the terms of employment, which may be amended and the employee should be informed thereof. The employer’s aim should be not to punish employees for breaching the obligation of confidentiality, but to prevent information leakage. From the perspective of the disclosing party, it is worth becoming informed about the processes in which confidential data will be used and possibly include them in the agreement.

Actions after a violation of the NDA

In order to ensure that the agreement has true impact on the actions of the parties, it should provide for sanctions – penalties in case of a breach. The common rule is to maintain equality between parties in each agreement. In practical terms, this means that the penalty specified in the agreement should be proportionate to the risk of damages to the disclosing party caused by the receiving party’s violation. The possible amount – as most often sanctions are specified in a monetary value or in a percentage of financial value – is difficult to determine precisely. The parties must agree to conventionality. The accuracy of the amount should be based on actual losses which may be incurred. The reference point may be the size of the business. The owner of a shoe repair shop could not demand millions in penalties in case of a breach of confidentiality of information relating to working on their new company profile on the Internet, however, if the confidentiality breach concerned airlines working on the promotion of a new destination, such demands might be justified.

If violation of confidentiality agreement is detected, the first step should be to immediately submit a demand to the culpable party to cease actions which contravene the NDA provisions. Next, it is necessary to prove the violation of the agreement and to issue a demand for payment of the contractual penalty. If the party in breach of contract refuses to admit to the violation and to comply with the demand to pay the penalty, the disclosing party should commence court proceedings against the party in breach of the NDA, unless other intermediate actions have been established. In this case, enforcement of the penalty must be carried out on the basis of a binding court order.

When does an NDA cease to be effective?

The validity term of an NDA is specified by the agreement itself. It depends on the information to be protected. It may be decided that some information should be kept secret for many years, while in regard to other information, it may be beneficial to disclose or even disseminate it at a certain time specified in the agreement. The first example may be a confidentiality clause relating to security means used in a bank, while the second example may concern works carried out on a new product.

Among the most popular confidentiality agreement types, we see agreements concluded for a specific term (usually several years) starting from the time of signing the agreement, disclosing the last piece of information or corresponding to the term of the agreement on collaboration concluded between the parties or for a specific period of time after its termination.

Apart from the established validity term, the legal effects of the agreement may be repealed or suspended upon demand of competent statutory bodies. In such a case, we should check whether the institution in question is authorised to demand information protected under the agreement. It is essential for safety reasons to ask to see an appropriate document from the representative of the body demanding to access information covered by the NDA. We should also try to find out from them whether informing the other party of the confidentiality agreement about such a situation would be seen as obstructing proceedings or even a more serious offence.

Key elements of an NDA

Like any other agreement, an NDA should be prepared in accordance with the legal provisions in force, however, its detailed provisions may be determined freely.
The elements included in NDAs are:

What to look out for while signing an NDA

We should exercise a great level of care while signing any type of agreement. It is best to consult a lawyer who practices in the area of law that is of interest to us. Elements that should be specified are matters exceeding the scope of law, i.e. strictly business issues. In regard to such issues, it should be considered whether the subject of the agreement is described in a safe manner (from excessive specificity to excessive generality), whether the penalties are appropriate to the potential losses, whether the agreement term is justified, etc.

It should be stressed that an unilateral NDA does not have to be an agreement that treats all parties equally, as it is considered separately from the benefits for the receiving party arising from the agreement on collaboration. It is the latter agreement that provides for benefits such as contracted work and remuneration. An NDA is, in a way, an execution agreement, i.e. a servient agreement in regard to the entire relationship between the parties. To simplify the issue, we could say that by breaching an unilateral NDA, the receiving party deserved the stick, but by complying with its provisions, it will not earn the carrot, which is buried somewhere else.

We should not be surprised if our partner asks us to sign a confidentiality agreement. It is a good idea to have our own NDA template already prepared in several versions (unilateral, Polish, English, bilingual, general, detailed).

While dealing with digital agencies, we may rest assured that the other party will understand the need for signing this type of agreement. Most likely, a suggestion to sign a non-disclosure agreement would only result in the other party rolling their eyes if it was made by a start-up company in negotiations with a capital fund to finance a project.

Below, you can find a sample template of a mutual confidentiality agreement. It is a “soft” version, without specific penalties amounts.

We use cookies to ensure that we give you the best experience on our website. If you continue to use this site we will assume that you are happy with it.Ok 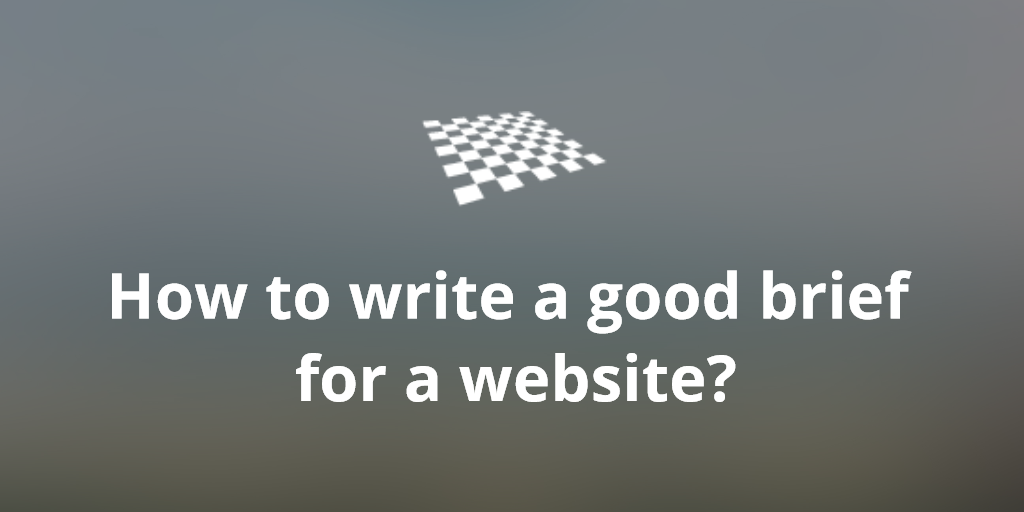 How to write a good brief for a website?